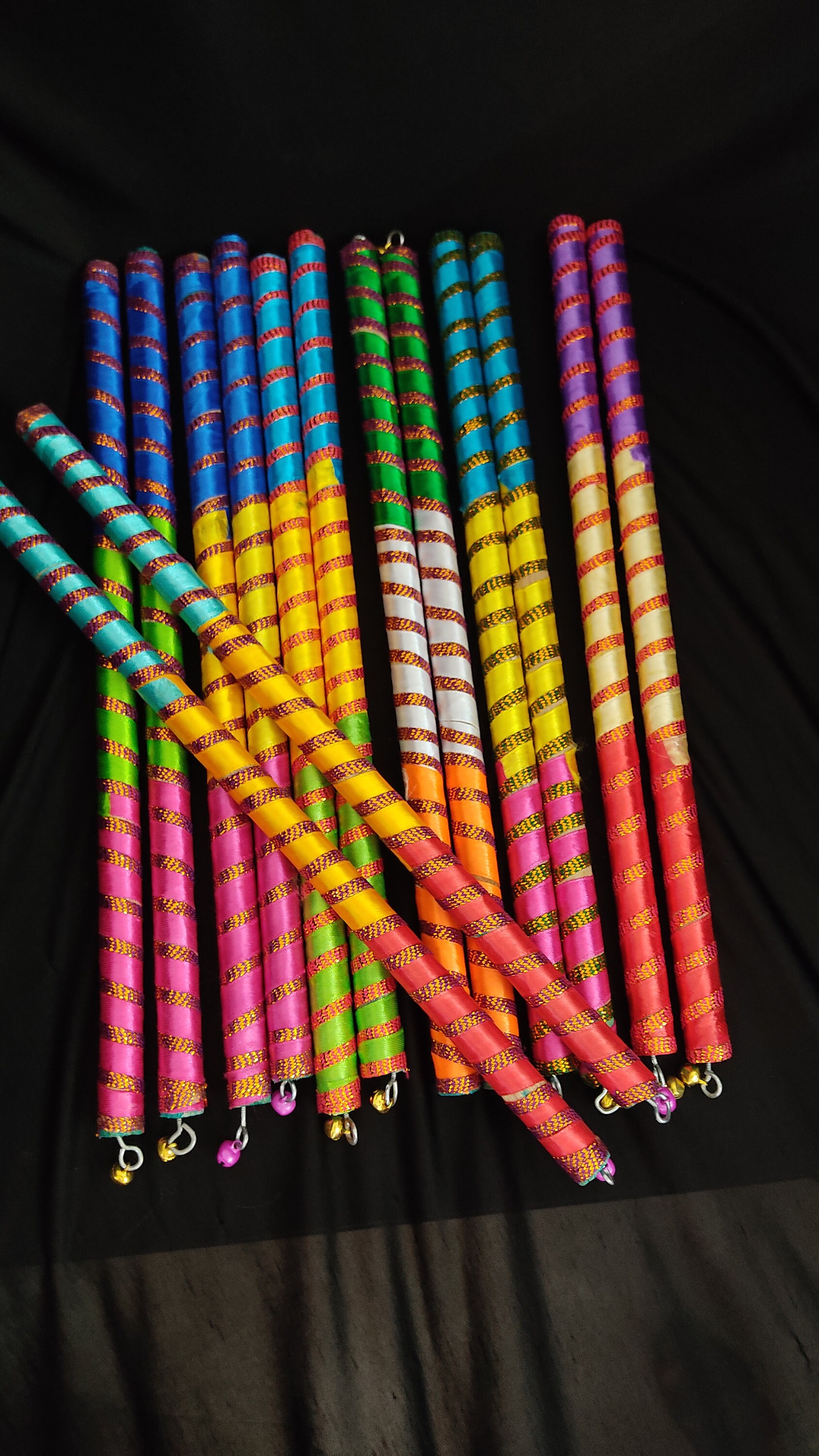 The beats of dandiyas, the sounds of the conches at Durga Puja, the beautifully decorated Golu’s and music filled Mata Chowki’s.  These are some of the sights and sounds of Navratri across India.

Do you know what Navratri means? Nav means “nine (9)” and ratri means “nights”.  Navratri honors the divine feminine energy and her various forms during these 9 nights.

Goddess Maa Durga and her 9 forms protected the world against evil to restore peace and prosperity.  Each night is dedicated to a form of Maa Durga as follows:

To understand the origins of Maa Durga, let’s travel thousands and thousands of years back to a time when there lived a Demon King Mahishasura.  He was half demon and half Buffalo. He was very powerful but was greedy for more power, especially that of immortality. He wanted to live forever!

To achieve that, He prayed to Lord Brahma, the Creator of the Universe for years and years. He stood on top of a mountain in the extreme elements and mediated upon Lord Brahma.  Lord Brahma was impressed by Mahishasura’s dedication and appeared before him.  Lord Brahma asked – Mahishasura, you have been praying so diligently. What are you looking for?  Mahisasura answered – Lord Brahma, I am looking to be immortal.

Lord Brahma immediately responded – that is an impossible boon to give. Whoever takes birth, must one day come to an end.  Mahisasura thought for a minute and asked – How about this? No man, no God or no animal can ever destroy me.

Lord Brahma scratched his head and he realized there was a loophole here – Mahishasura had not asked for protection from a woman.  Immediately Lord Brahma smiled, agreed and disappeared.

Mahishasura did not think a woman could ever be strong enough to defeat him, so in his head, he was practically immortal.  He started creating havoc everywhere. Him and his army destroyed homes, forced people to stop praying to Gods and dethroned Lord Indra from the heaven.

Now the Gods were very worried and they approached the Holy Trinity – Lord Brahma, Lord Vishnu and Lord Shiva.  They joined their powers and from a blinding light emerged Goddess Durga. The most divine, powerful, beautiful and strong Goddess.

The Gods gifted her their weapons – Trident, sword, Holy bead necklace, thunderbolt, bow, an arrow, mace, and many more to help fight Mahishasura. Himalaya mountains gifted Maa Durga a Lion as a vehicle.

Seated on her Lion and adorned with all the weapons, Maa Durga went to Mahishasura and asked him to surrender. Mahishasura didn’t think he could ever be defeated! He laughed “ha ha ha ha” You think I am scared of you? I will defeat you!

He totally underestimated the power of Maa Durga. The battle began and lasted 9 nights. These are the 9 nights of Navratri. On the 10th Day, Maa Durga defeated Mahishasura and restored peace everywhere.

The moral of the story is that Navratri also celebrates the victory of Good over evil.

How is Navratri different throughout India?

Given the diversity of culture, languages, food and clothing across India – the Navratri celebrations look different everywhere.  In Tamil Nadu, a big part of the celebration is Golu – folks create a staircase and decorate it with dolls as well as artifacts. People visit each other’s homes, offer prayers and come together as a community.

In Gujarat, it is a dance party for 9 nights. People gather in the evenings and dance the night away to songs dedicated to Maa Durga.  Garba and Dandiya – the dance with sticks, are the most popular folk dances enjoyed during Navratri.

In the North, Ramlila – the story of Ramayana is performed for 9 nights, also folks host Mata Chowki where community gathers to sing songs in honor of Maa Durga.  In the Eastern part of India, especially Bengal – huge Durga idols are created by sculptors. Various festivities are held every day till the day leading up to the 10th day, when Durga defeated Mahishasura. The festival is called Durga Puja.

Several regions across India celebrate the divine feminine energy, her strength and how She saved the world from evil.  So close your eyes and feel the the beats of Dandiyas, the sounds of conches at Durga Puja, the beautifully decorated Golu’s and music filled Mata Chowki’s.

To learn more about Navratri check out our Navratri Story and to get rangoli and toran please make sure to visit our shop.

5 Ways to celebrate Navratri with Kids

What is Rangoli?  Rangoli is an art form originating in India.  It is a type of decoration drawn on the ground or sidewalk in front of a home.  Rangoli is thought to bring good luck, Read more…

Ganesha Chaturthi is celebrated/observed on Tuesday, August 30th, 2022 this year. This is the Hindu celebration of the birth of Lord Ganesha.  His life represents prosperity, wisdom, and good fortune. We have put together a Read more…